How the Astoria Clowns Came to Be 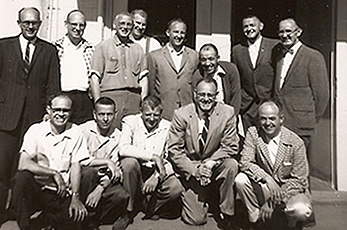 In 1955 some Astoria merchants, organized under the Chamber of Commerce Retail Merchants Committee, with Sam Yockey as chairman, entered the Lewis & Clark Sesquicentennial Regatta parade as clowns. The idea originated with Charles DeFoe, secretary of the Astoria Chamber of Commerce. Chuck had previously been chamber manager at Lebanon where some of its members had dressed as clowns to help with its Strawberry Festival. Chuck borrowed their costumes and acquired red noses and make-up. After the parade the costumes were returned to Lebanon, but were borrowed again for the 1956 parade. After that they were never returned, but many clowns acquired their own outfits. Sam and Chuck decided that clowning was more fun than building a float. 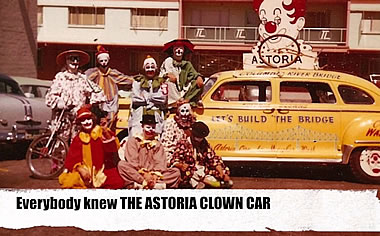 The clowns had so much fun and received so much attention in the parade that their performance was repeated in the Astoria Regatta Parade in 1956 and 57 with a growing number of props. One prop was a folding Japanese military bicycle someone had brought back from the war. In the 1957 Regatta parade, Jorma Leinassar was riding it when it collapsed and he broke his arm. This didn't slow down his clowning zeal, but while recovering, he decided the group should be incorporated in case of a lawsuit from parade activities.

Dr. Jorma Leinassar, Dr. Harry Duff and Sam Yockey spent long hours at Pier 3 of the Port during the winter learning to ride unicycles and Floyd Reith later became proficient on the one-wheeler. Arnold Mart sold for $250.00 a 1948 Chrysler that had been an emergency ambulance. This was painted bright yellow. Since one of the main goals of the chamber at that time was to promote a trans-Columbia bridge to replace the outmoded ferry system, the clowns decided to make that their goal also. A bridge and the slogan "Let's build the bridge" were painted on the car. The purpose of the organization at that time was to sell the people in OR and WA on the need for a bridge across the Columbia.

Since the legislatures of OR and WA would have to agree to sell bonds to pay for the bridge, the clowns decided to spread the word through the two states. 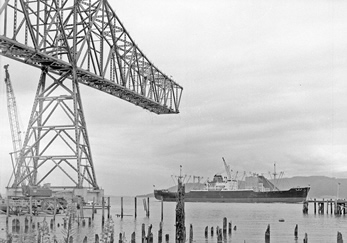 In 1958, at the urging of Jorma Leinassar, the group organized as a non-profit corporation, separate from the chamber. By then it had 15 members. Carol Wooldridge painted a clown face on plywood that was placed on top of the 1948 Chrysler that was painted bright yellow and covered with the bridge slogan "Come on Oregon Let's Build the Bridge." That year the clowns paraded in Castle Rock and Longview Washington and Florence, Oregon in addition to the annual Regatta. In 1959, the schedule included the Seattle Sea Fair and the Portland Rose Festival Twilight Parade along with a number of other out-of-town appearances. The OR legislature came to Astoria to listen to the community's needs for a bridge and were entertained by the clowns. Bonds for the bridge were finally authorized by the 1959 OR and WA legislatures.

So how did the battered ASTORIA CLOWN CAR, last seen in Shaniko, get back to Astoria? It is pictured both now, and in its former glory.

JEFF DALY told the Ear that WOLFIE (aka Greg Smith, pictured inset), owner of the Dancing Wolf Ranch, a working hay ranch in Wamic, offered to deliver the car. "He rode bulls and was a ski racer in his early days," Jeff explained. A perfect choice to wrangle a 1948 Chrysler.

All Wolfie wanted in return was a shot at some clam digging. But first, he had to cut his hay. Then there weren't any clam tides. Then the hay was still wet. Then Wolfie fell off his tractor and dislocated his shoulder while protecting his new hip replacement. And then, Wolfie's ranch caught fire, and two helicopters and 14 fighting units were trying to put it out.

The next projected delivery date was on a Sunday. "Friday morning my phone rings, and I'm in fear to answer," Jeff recalled. This time Wolfie had been startled by two rattlesnakes while loading the car on the trailer, and he slipped and fell and dislocated his shoulder. Again. But ... he banged his shoulder into a nearby barn wall to fix it, and delivered the car as promised. Bravo, Wolfie!

So when can you see the car? Jeff told the Ear that 11 children of the original clowns have formed the SONS AND DAUGHTERS OF A CLOWN. The group will wear the original clown outfits worn by their fathers in the 1960s 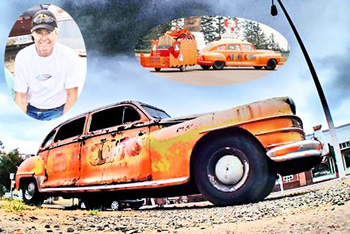 as they accompany the classic Chrysler in the ASTORIA REGATTA PARADE at noon Saturday. Still in a state of disrepair (but an overhaul is in the works), it will be enthroned on a trailer and towed by AL ROBITSCH, And that's not all. "The car will be on display for touch and feel at the foot of 14th Street all weekend," Jeff said. Home at last.

Watch 12 episodes following the escapades of a bunch of clowns building a car, and they did it backwards!