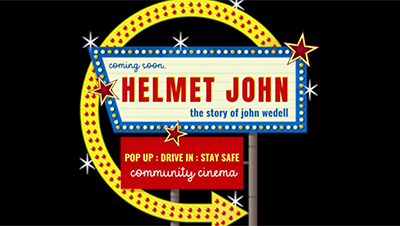 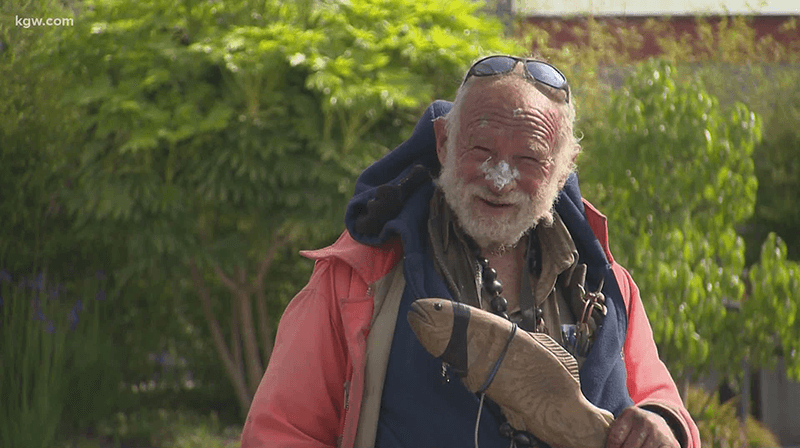 A man known as "Helmet John," for the red motorcycle helmet he sometimes wears for protection from unseen forces, is helping his community rediscover what home is.

In Astoria, Oregon, near where the mighty Columbia River flows into the Pacific Ocean, in a place Lewis and Clark once explored, more than 200 years later, another well-known local figure explores the streets of Astoria. Alone.

This is the unlikely story of how a man known as "Helmet John," for the red motorcycle helmet he sometimes wears for protection from unseen forces, is helping his community rediscover what home is.

During the height of the coronavirus pandemic, the city's craft breweries, bakeries, and bistros were locked up. Under Gov. Kate Brown's stay-home order, people were sheltering in their houses.

For John Albert Wedell, a man without a house who sleeps on the city streets, he was home.

"I'm outdoors in the winter, too. You know, rain, snow, sleet, hail, here I am," Wedell said while showing a thumbs up sign.

Then, Wedell laughed. The hearty laugh punctuates nearly everything he says. "They say I'm a colorful character," he said. Then, another laugh.

Wedell has wandered the streets of Astoria for several years. Most of the local townspeople know Helmet John and gave him that nickname. Many wave and say hello. That is, when they were out on the streets shopping. On this day, the streets were abandoned.

The 73-year-old Wedell has been offered shelter, but has chosen to live life his own way for now. Although, when asked, he does admit to dreaming of winning the lottery and buying a house.

For most people, Helmet John is a mystery. How exactly he ended up homeless, no one really knows. But, there's a lot more to Wedell than his current circumstances.

"I have a master's in physics at Berkeley, a master's of business at New York University Business School, so I have enough theoretical background to know what's going on here," he said...continue reading